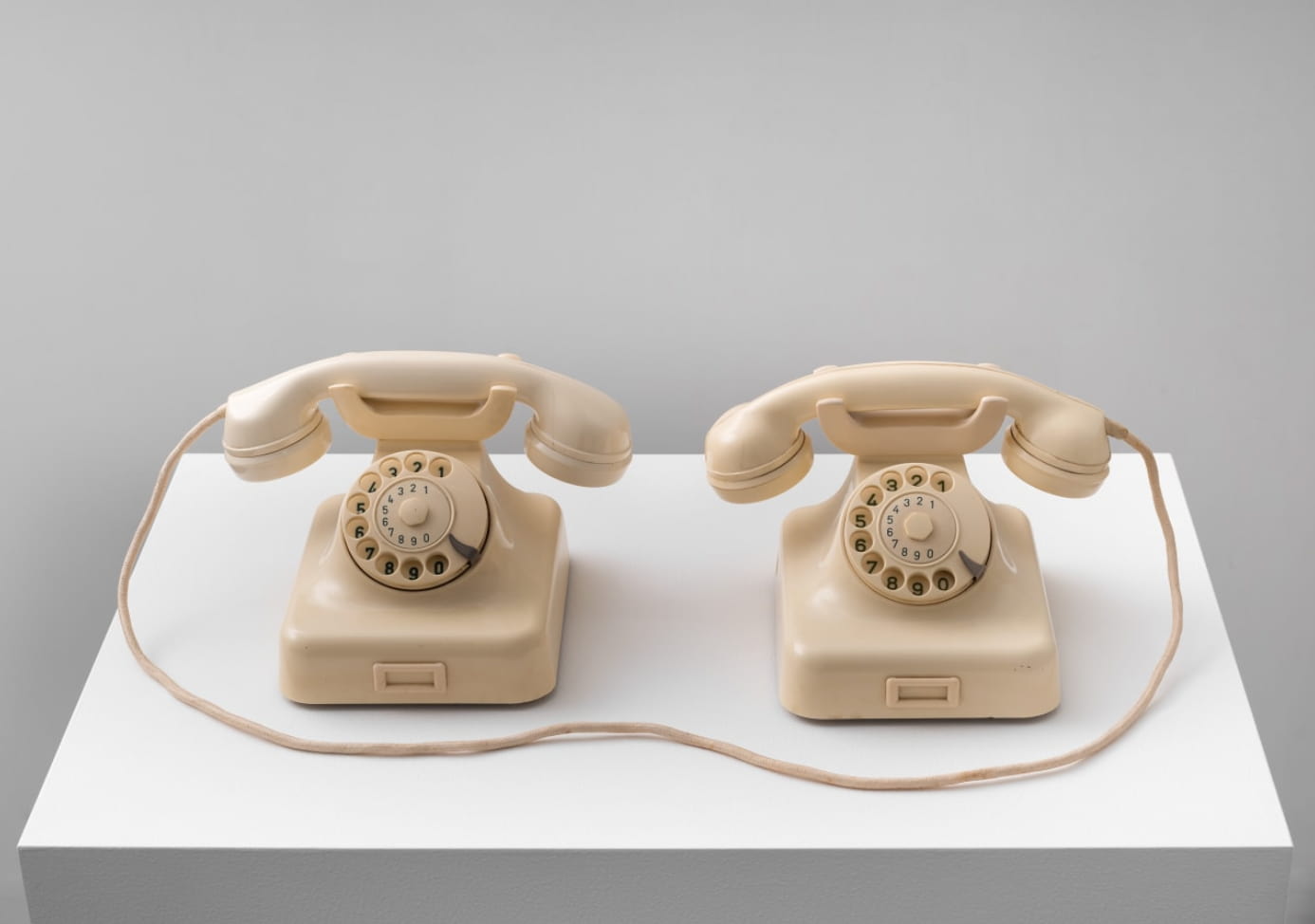 Feldmann blurs the boundary between high and low brow culture in his practice, often employing pre-existing historic paintings and objects found in markets, auctions or second-hand shops his works. Taking pre-existing art works and objects brings into question the concept of originality of a work and the fetishization of the ‘original’ in the art market. But Feldmann’s work explores the concept of fetish and collecting more broadly too.

In one of the thirteen works featured in this exhibition, Feldmann brings together 70 individual black and white photographs of all the items of clothing from one woman’s wardrobe in ‘All the Clothes of a Woman’. The subject in question is represented in absentia, effectively making the work a portrait of a woman through her wardrobe alone. The work draws attention to the way capitalist culture fetishizes the attire of women, objectifying them through their dress and style, imbuing the objects with value. You are what you wear. But there’s also something fetishistic and voyeuristic about carefully laying out the clothes—knickers, bras, skirts, shirts— and photographing each one.

A sculpture featuring a pair of gold sandals (‘Untitled’) embedded with upturned drawing pins, is presented on a plinth. The shoes look like a sadistic trophy. Recontextualised, stripped of their original function (as wearable shoes) and placed on a pedestal, they are presented as desirable, luxury objects, totems and fetish objects to be admired, or worshipped. Similarly recontextualised and rendered un-useable are the two white vintage telephones with receiver cord connected together like an umbilical cord, and placed on a pedestal like artefacts from a bygone era (which they are).

Many of Feldmann’s works are ‘Untitled’, or use a simple noun describing the often banal objects or subjects presented. The works are also left undated, eschewing the conventions of the art market. Titling the works in this way allows the viewer to avoid a single artist-imposed narrative and encourages an open interpretation of the works, enabling the viewer to project their own meaning or experience onto the works. But, they are also a classification or cataloguing system for a collection of objects. Photographs, paintings, objects, and collages are clustered together according to their subject matter: ‘Lips’, is a collection of 11 photographs of women’s lips—painted, glossy, seductive, smiling and pouty— pinned to the wall like entomological specimens .‘Clouds’ is a collection of 16 photographs of clouds (‘cloud porn’, anyone?);  ‘Telephone’, a sculpture of two vintage telephones with receivers connected by one cord; ‘Collages’, a collage of 10 women’s faces from the pages of vintage magazines and advertisements; and ‘All the Clothes of a Woman’.

On a separate wall, a small untitled collage of images of consumer goods hangs alongside the untitled collage of glamorous women’s faces—hairdos and makeup suggest they are from the ‘50s or ‘60s. The images of consumer goods — cigarettes, perfume, Spam, chocolate bars, meats, shaving cream—are also gleaned from vintage magazines the artist collected. They conjure up the halcyon days of advertising during the post war economic boom, which signalled the rise of conspicuous consumption.  Hung together, the works imply the conflation of capitalism and mass media which results in an image saturated spectacle, promoting the accumulation and consumption of goods— a commodity fetishism.

Feldmann’s recontextualised found objects and art works are also an image saturated spectacle in themselves, fittingly presented in a commercial gallery space. Art works have become commodities for consumption, and reality is reduced to commodifiable fragments, lists and categories, while we are seduced by the glossy veneer.