After decades of being overlooked, it’s fair to say that 73-year-old American artist McArthur Binion is having a moment. With a spate of recent exhibitions, notably his inclusion in the 2017 Venice Biennale Viva Arte Viva and a 2018 solo exhibition at the Cranbrook Art Museum in Detroit, this past month the artist has also celebrated the opening of several solo exhibitions in Asia. One at Lehmann Maupin Seoul was preceded by New: Work and Hand:Work:II, a two-gallery show spread out across Massimo de Carlo and Lehmann Maupin in Hong Kong’s Pedder Building.

In the late 1970s Binion found himself at the centre of the dizzying, meteoric art scene in Soho, New York, hanging out with artists like Jean-Michel Basquiat, Dan Flavin and Sol LeWitt. “When I moved to New York in ‘73 it was a small village. You could be an artist and not have much money. Everyone was out on the street. It was a small world. It wasn’t even called the art world then. That only happened in the early ’80s” he says. Binion’s works are seemingly cut from the same mould as the two minimalist figureheads; they appear minimalist from a distance, but up close reveal themselves as something entirely different.

Using oil stick, Binion draws vertical and horizontal lines in a grid over a layer of photographs or copies of personal documents: photocopies of his birth certificate and pages from phone books he kept from 1972 to the 1990s. The surfaces of the aluminium or wooden panels are divided into squares, resembling a patchwork quilt or woven rattan. Some works are in black and white, while others are washed over with expressionist strokes of coloured ink: purple, green or yellow. These biographical documents and photos underpin all Binion’s work, and are what he refers to as the “under-conscious”, rather than collages. This skin is marked with a network of grids, both concealing and disclosing information. But there is much more than just surface to Binion’s work; the works are self-portraits as much as they are abstract compositions. 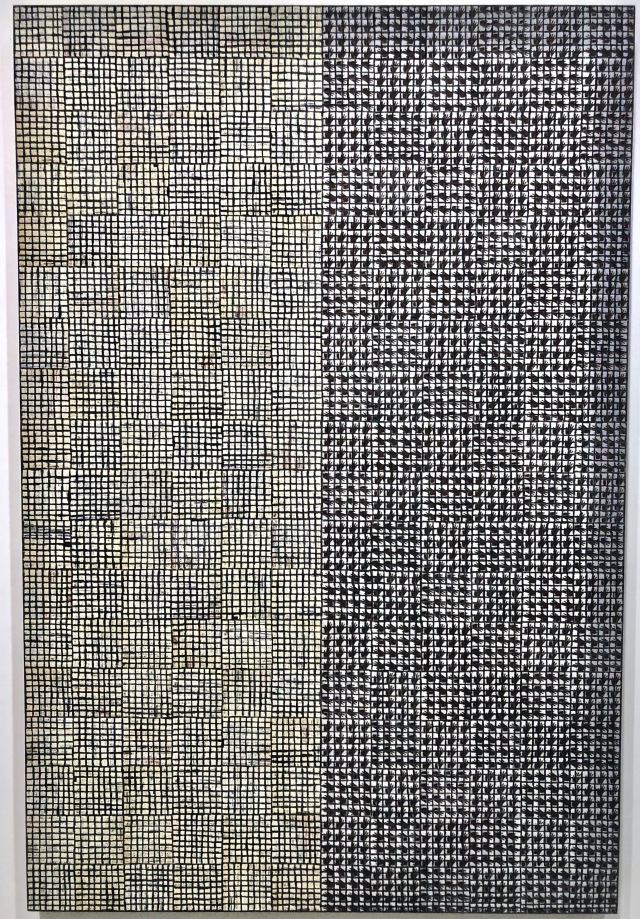 Some works are divided vertically into two equal sections, lighter and darker, like Ink:Work (2018) at Lehmann Maupin Gallery, a large painting, divided vertically into a red and blue grid that from a distance almost references colour field painting. A closer look reveals layers of colour and texture atop copies of handwritten numbers and names: Lois Markowitz, Peter Brown, Charles Mingus III. Friends, colleagues, people who have gone out of his life and those who have remained. Memories, moments and relationships past recalling his earlier years in New York.

Like the images of his hands, copies of lined and handwritten square sheets are pieced together the right way up, upside down, left and right. The repeated use of handwriting and the incorporation of images of the artist’s hand alludes to the manual labour that goes into each piece, as well as referencing the artist’s own biography. Binion was born in 1946 on a cotton farm in Macon, Mississippi, and started picking cotton at an early age. His hands were always working. Later he found his creative voice as a poet and writer, before discovering art.“It took many years to come to, but it’s kinda obvious that everything we do comes from the hands,” he muses. “I started out as a young writer, so I think when I started to make art in the late ‘60s I had already found my head as a writer, but as an artist I had to find my hand. Most artists find their hand first. But as a consequence I feel like I have more control of the work coming from me as opposed to coming from outside, like school or other artists and influences.”

The grid became a repetitive motif in his work, something the artist has been using since school. “I’ve always been attracted to the grid and structure. It’s like the structure of life in a way,” he explains. “My father was a minister, and I was raised in a very traditional and structured way. I was the one who snuck out of church. It was a small house with eleven people in it and very little money. So, there had to be control. That’s probably where the grid comes in,” the artist explains.  Structure and discipline are words that crop up frequently with Binion. He has the discipline of a fighter, in the studio by 7am every morning and working solidly until 4pm. No music, no distraction. “There’s nothing going in. Everything is going out. I don’t want someone else’s greatness influencing me,” he says.

Despite this there is a musicality and rhythm to his work – the works swing and pulse in abstract. “I want people to listen to the painting. I have this thing called my visual ear. I think the fact that I found my head already, my work comes from a different place than the art stuff. I see colour personally. Every mark on a painting is made by me.” In Binion’s Hand: Work series, tiny photographic images of the artist’s hands at work are repeated numerous times, methodically organised into grids. His hands are placed this way and that, creating a woven hatching pattern with a visual rhythm.  In other works like Ink:Work (2018) words bleed across and down the surface of the board, reminiscent of the modernist poems of E.E.Cummings – where words tumble playfully down the page– establishing a movement and tempo. Some images and words burst their way loudly through the structural conformity of the grid, while others recede behind it, sombre and quiet.

Perhaps unsurprisingly the artist cites the Beat writers of the 1950s, who found inspiration in jazz, as being among his favourite writers. Although the works visually take minimalism as a reference point, they are too personal and emotive to be minimalist. Their movement and sense of improvisation have more in common with jazz than minimalism or the political art that was expected of a black artist in the ’70s. Although he stresses, “I’m not influenced by jazz, but we come from the same place.”

In much the same way as jazz improvisation, Binion’s work is a conversation, sometimes with other artists who came before him, other times with the audience. But more often it’s a conversation with himself – between the past and the present, minimalist restraint and the emotional, line and shape, structure and improvisation. Binion creates visual rhythm from the synthesis of binaries, weaving together abstraction and storytelling to create a hallmark vernacular and style, full of rhythm, repetition and visual syncopation. 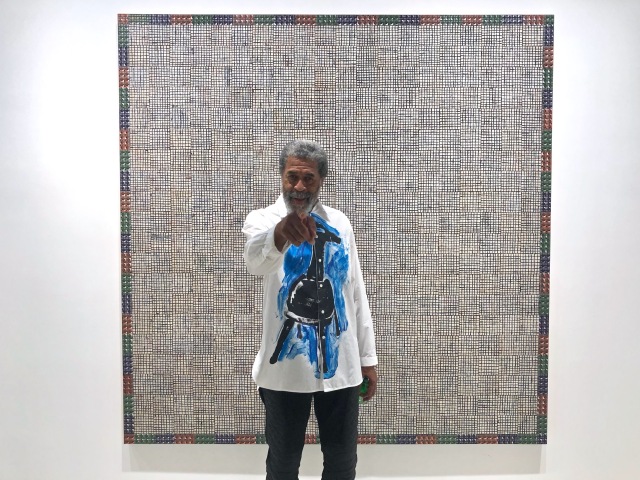