It’s tempting to dismiss Marc Quinn’s work as intellectual posturing, especially considering what has been written about him since he first came to prominence in 1991 with ‘Self’, a cast of his head made from nine pints of his frozen blood. Often dismissed as a “shock” conceptual artist, there has been as much mythology about him as there is about his art. But one senses the real Quinn in his Shoreditch studio. The large, white, minimalist space exudes Zen-like tranquility.

Besides being littered with the creations that have earned him fame — a sculpture of armless artist Tom Yendell; a golden skeletal Kate Moss in meditative pose (based, as I was to discover on my way out, on a Tibetan Buddhist sculpture sitting in the entrance); and ‘Mirage’ (2009), based on the image of an Abu Ghraib prisoner being tortured with electric wires — there are some intimate fragments of his private life; a concrete cast of his pregnant wife and a photo-realist painting of his son Lucas playing. Indian and Tibetan Buddhas sit in corners and on every bookshelf. Collecting them is a passion he has taken to in the past several years.

Seeing his masterpieces in one space has an incredible impact. It reflects the diversity of Quinn’s life, and the many fragments that make up his artistic interest. One senses a grounded person who is unlike the narcissistic image he has been tagged with in the media, and who values quotidian things like family, art, spirituality and exploration. He is an artist with a keen sense of popular culture and history, and a curiosity about life.

Quinn read history and art history at Cambridge, rather than taking the conventional route of going to art school, and this subject has played an important role in his work. He draws on classical Roman and Greek sculptures, and old masters like Rembrandt and Caravaggio, or Holbein. “I’m fascinated with art history. It gives me an interesting perspective on the past and that’s why I collect ancient sculpture and art.” His controversial 12-foot marble sculpture, ‘Alison Lapper Pregnant’ (2005), depicts a heavily pregnant woman who was born with a congenital disease without arms and with truncated legs. It occupied the fourth plinth in Trafalgar Square from September 2005 and late 2007. The complete Marble Series also includes amputees. Quinn’s use of marble evokes ancient sculptures and busts rendered limbless due to the passage of time.

“There’s certainly a dialogue with classical history in these works. I got the idea when I was at the British Museum, watching people looking at classical fragmented statues and admiring their beauty,” Quinn explains. “I thought, if a real person with exactly the same sort of body came in, those people wouldn’t know how to behave. They’d feel embarrassed. It was interesting to me that some things that are acceptable in art are unacceptable in life.” The series also demonstrates Quinn’s interest in biology and human willpower. Despite their shortcomings, the subjects still manage to lead normal lives, not accepting their ‘biology as destiny’.

Quinn’s works often challenge the concepts of normalcy by exploring physical and sexual transformations abetted by science. In his 2010 White Cube exhibition, Allanah, Buck, Catman, Chelsea, Michael, Pamela and Thomas he presents us with ‘Buck and Allanah’ sculptures of a perfectly anatomically rendered transsexual couple with half-way sex operations- Allanah is a woman with a penis, and Buck a man with the female genitalia of his previous life still intact. “That’s what interesting about them, both have sort of transformed into the other,” says Quinn. ‘Chelsea’ has retained all her natural features, but has caricature like enhanced silicone breasts. ‘Catman’, like Jocelyn Wildenstein before him, has employed the use of surgery and tattoos to give his appearance a (very) feline quality. ‘Thomas Beatie’ is a marble sculpture of the real-life woman turned man who carried a child after his wife had a hysterectomy. “The whole exhibition at White Cube earlier this year was about people who transform themselves. Nowadays, with modern medicine and science you can do what you want with yourself,” he says. “These changes are always made for artistic reasons. Science is no different to art. Science looks for answers. Art looks for questions.” Some have called them freak shows but that misses Quinn’s message. He is prodding us to reconsider our notions of beauty, normality and biological possibilities.

“Life is transformation in all its manifestations,” Quinn adds “I don’t make things to shock people. I make them to have emotional contact with people, and everybody’s going to have a personal reaction to them.” Humanity in every colour, shape and form plays a central role in Quinn’s work. One suspects he feels both curiosity and empathy about his cast of outsiders. He draws from his surroundings and tries to understand the world around him. “All these sculptures are done from life with the sitters”, he explains. “They are about real life. I’m always interested in finding, rather than inventing. They are not fantasies. There’s so much amazing stuff in the world that you don’t need to make it up.”

Quinn, whose own father was a scientist, fuses science with art to pose uncomfortable existential questions. “I’m interested in biology and people. What it means to live in a body. In a sense those two areas converge.” He has worked with DNA in his ‘DNA Garden’ (2001), a portrait of a sitter composed of 77 plates of cloned DNA — 75 from plants and two from human. ‘Garden’ (2000) is a walk-though installation of hundreds of flowers frozen in silicone, never to decay. ‘Self’, made of his own blood, must be constantly kept below freezing point to maintain its solidity, its fragile existence hanging in the balance, dependent upon a constant source of electricity. He describes it as a “sculpture on life support.” Quinn creates a new ‘Self’ every five years, echoing Rembrandt’s series of self-portraits, and an ultimate example of life becoming art, and art becoming life.

Working with both traditional artist’s materials and biological ones like DNA and blood gives him freedom to explore the elements of modern existence. “That’s the point of being an artist now. You can do anything. There are a million techniques and media, and we live in a world of a million different selves. Plus, you’re not the same person all the time. Sometimes you’re happy, sometimes sad. In a way art should reflect life. All its aspects are valid parts of experience. They should co-exist.”

An oft repeated criticism of Quinn (and other contemporary conceptual artists) is that he doesn’t produce all the work himself. “That only seems to be applied to figurative work, never abstract art,” he notes. “With figuration people want to feel it was made by the artist. If you cover a canvas with red paint, no one worries about who painted it.” He points out that artists have always collaborated on works. “It was always a team effort”. Employing sculptors, technicians and artisans has made his extensive and diverse body of work possible.

“Usually with the paintings I’ll work on the first one or two. Then I’ll work with assistants. Obviously, I supervise everything they do, but I work in a collaborative way with them. Otherwise I’d make ten paintings a year and no sculptures. I want to do everything now, so I have to work collaboratively. Also, it’s an interesting way to work. It gives me a slight distance and objectivity about things.”

A taste of what Quinn has in store for the future is a recently exhibited sculpture of a youth contemplating a skull. It is based on Zubaran’s ‘Saint Francis of Assisi in his Tomb’. “I’m often inspired by other art, but I transform it,” he says. “I like the echo of the monk and the hoodie. It’s about now. Someone who’s found themselves in a toxic waste dump, but experiences a moment of poetry with something he’s found, the skull. It’s about moments that make life real. I’ll probably make a whole series of works about the city at night.”

Is Quinn’s art about provocation? It certainly confronts us with subjects that might make us uncomfortable. If good art is supposed to provoke reaction and force us to re-examine the world around us and ourselves, then Quinn certainly fulfils the criteria. His work may not always be beautiful, they may appear abject, yet they are diverse and poignant. As Quinn puts it, “Art comes out of the experience of being alive.” 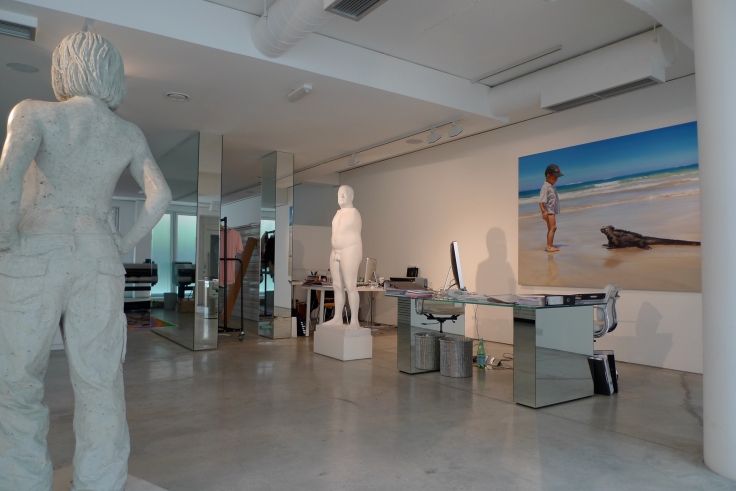