The Colour of Beauty 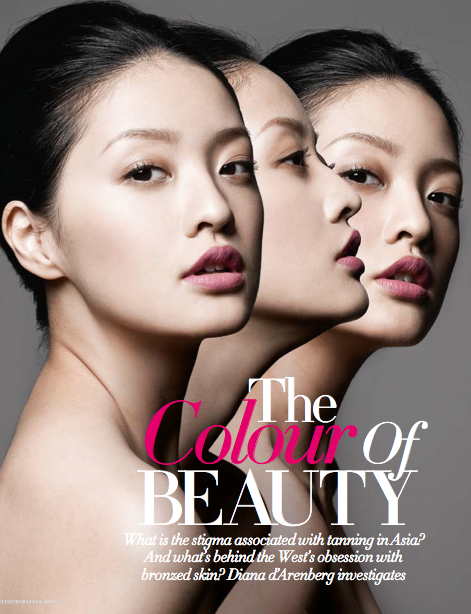 It’s not uncommon in Asia to come across a fair skin bias. Children grow up harangued by parents to stay out of the sun for fear of becoming darker – the implication being that darker skin makes one less attractive. The association of white skin to beauty has been culturally and historically ingrained throughout human history. In many early civilizations, including Western, skin colour was used as a barometer for class. Tanned darker skin was an indicator of lower class due to its association with outdoor manual field labour. To have fair skin implied that one was of a wealthier class. Women went to deadly extremes to whiten their skin, including the application of lead and arsenic based cosmetics to their skin in the 1500s of Queen Elizabeth I’s reign, which slowly led to death by toxic poisoning. The feminine ideal during the Han period in China was for women of the court to sport unnaturally white skin and women routinely ground pearls from seashells and swallowed them to lighten their skin. During the Achaemenid dynasty in Persia (now Iran), farmers used hydroquinone lightening creams to offset the tanning they get from baking under the sun. In the West this trend for fair skin continued for several hundred up until the Victorian era.

In Asia, however, the obsession with fair skin continues. In India, where the misconception that darker skinned Indians are inferior still persists, skin-whitening creams outsell Coca Cola. It is a prejudice that has existed for centuries. Ancient scriptures and folk-tales portrayed the good character as having white skin while the evil with dark skin. Two hundred years of British rule and the inequalities created by the caste system only further embedded the notion of fair skin as superior and reaffirmed power dynamics based on skin colour. These old cultural traits are reflected and perpetuated through the popular media where products are endorsed by fair skinned Bollywood actors and models. Aishwarya Rai, one of India’s leading stars, made international headlines when she threatened to sue a fashion magazine that allegedly lightened her skin tone on its cover. And this is just the latest in a series of skin-lightening controversies that have recently erupted in Asia.

In Japan fair skin also remains the standard of beauty and it is a bias that has been around for a long time. The geisha of course were well known for their white-painted faces. The bihaku, or ‘beautiful white’ ideal is widespread in Japan, leading women to avoid tanning at all costs and resort to skin bleaching creams in the quest for unnaturally porcelain pale skin. While walking on the streets of Tokyo or Seoul it’s not uncommon to see women wearing gloves, hats and carrying parasols in unbearable summer heat. What is the stigma associated with tanning in Asia? A white complexion is an indicator of class and privilege and was seen as noble and aristocratic, especially in Southeast Asia, where the sun was always out. Only those rich enough could afford to stay indoors, while peasants sweated and baked in the fields.

A well- known expression passed on through the generations in China, “One white can cover up three ugliness”, refering to the idea that imperfections can be disguised, and otherwise unsavoury characteristics can be excused if one is fairer. Pale skin is associated with purity, chastity and femininity. Unsurprising then that there is enormous societal pressure to resort to skin whitening. The colour of your skin can have serious implications on your social standing and job opportunities in many Asian countries. So, in an attempt to win that promotion, find love, gain wealth, and attain beauty and power an estimated US $18 billion spent a year by Asians on whitening products.

The West has adopted an altogether different view of tanned darker skin. Although traditionally sun-bronzed skin carried the same class stigma in the West, in a reversal tanning grew popular in the early 20th century. Since the 1920s when Coco Chanel came back bronzed from a holiday in the French Riviera tanned skin became chic and as de rigeur as the little black dress she popularized. Having a winter tan showed that you had the resources to go abroad to a warmer climate. It was a mark of leisure and money. Later on, the looser clothes of the Jazz era also freed up women’s bodies exposing more skin, enabling freedom of movement and leading to more tanning. A tan thus became a mark of liberation from the constraints of restrictive clothing and restrictive mores for women.

Of course with the ’50s and the explosion of the bikini in popular culture there was no turning back from the tan. It has cemented itself as a symbol of youth, health and carefree leisure. But it is also bound up with body image issues. After all, how many times have you heard that tanning makes you look slimmer, and hides cellulite and stretch marks? How many times has a friend commented that you look better, healthier after returning from a vacation with a tan? It seems sexier, more exotic and more desirable than a chaste pale one. Flick through the pages of magazines in the West or turn on your TV and more often than not what you will see are tanned starlets, celebrities, and supermodels, all feeding into the idea that a tan is glamorous and sexy. It will make you look like that gorgeous Brazilian model, it will disguise your flaws, and it will make you feel better. Or so we hear.

But we all know the perils of sun overexposure. Skin cancer, particularly for those living in Australia, is a source of constant anxiety in summer time. We have a generation of sun worshippers from the ’70s and ’80s with the highest rate of skin cancer to prove the dangers of too much UV. For those of us who heed the scare tactics of health professionals and dermatologists and avoid baking in the sun, there is a market of readily accessible tanning products all promising to give us that healthy sun-kissed look without the UV, from face bronzers, tanning mousses, sprays and creams. Skin tanning products in the West are as ubiquitous and culturally relevant as skin whiteners in Asia.

As a very fair Eastern European girl spending my teens in Australia, I was surrounded by the physical ideal of the tanned athletic body epitomised by Elle McPherson. It was like being a goth amidst a sea of smiling, pom-pom-wielding cheerleaders. Attempts at tanning generally resulted in a prompt visit to the dermatologist, and self-tanning products made me look more like the victim of scurvy than a sexy Bondi beach babe. There was nothing left but to embrace my pallor and make the most of it. A move to Asia, where one no longer sees the bikinied bronze Amazonians pouting from the covers of magazines, but rather wispy, ghostly white ethereal girls, helped that along. I experimented with whitening products to erase my freckles leaving me with alabaster skin behind a curtain of red hair. It resulted in a dramatic look, more warring Boudicca than innocent Lily Cole. The culture of white skin meant that sitting on boats covered head to toe in summer no longer made me the object of ridicule and ultimately it has spared me a great deal of UV damage.

But my girlfriends’ yearning for a St Tropez tan is hardly surprising. Flat-chested girls yearn for a fuller buxom figure, curvy girls are forever on the quest for a slimmer silhouette, curly-haired girls yearn for straight hair. The desire for what we don’t have is certainly nothing new. Adopting another skin is on one level the enhancing or replacing of our identity with the glamourised ‘other’- to an extent like trying on someone else’s skin, if you like. However, on another deeper level what we also find is interplay between class and culture. Whether it’s the Hollywood-ised pursuit of the perfect tan or in Asia for lighter, whiter skin, it seems that often deeply-engrained cultural perceptions of what is beautiful, and societal pressure to look a certain way, are underlying and driving our desire.

← Ron Mueck at the Gallery of Modern Art
→ Jewel Purpose

3 responses to “The Colour of Beauty”