As published in Asia Tatler, March 2013

Since the early 1990s, Belgian artist Arne Quinze has been redefining and challenging the way we engage with our urban environment and our homes. His big, bold, often fluorescently bright installations don’t invite us in so much as demand our attention and engagement. They prod us to reflect on the concepts of home, shelter, society and community – “how people conduct their lives, live around each other, and order society,” as Quinze once explained. Quinze gained international attention for his 2006 wooden installation ‘Uchronia: A Message from the Future’ for the Burning Man festival in the Nevada desert, as well as his 2007 ‘Cityscape’ in the heart of Brussels.

Since then, demand for his installations has been non-stop. He often works simultaneously on several pieces at once, jetsetting around the world to places like São Paulo, Oslo, London, Montenegro and Beijing. In January, Quinze unveiled a new installation, ‘Breeding Life’, at Art Stage Singapore. As one of the headlining artists at the fair, Quinze also delivered a talk alongside names such as Wim Delvoye, Fumio Nanjo and Uli Sigg.

The 41-year-old artist has carved out a unique place for himself with his dazzling installations, which straddle the worlds of design, art and architecture. Besides transforming cityscapes, his Studio Arne Quinze, set up in 1995, has also worked on multi-disciplinary projects such as the interior of Parisian concept store L’Eclaireur, chairs for REX and OMA, and the design of a theatre in Dallas, as well as pieces for the Swarovski Crystal Palace.

This is astonishing given that Quinze is a self- taught artist who, at the age of 15, was living on the streets of Brussels. As a young graffiti artist in the ’80s, using his environment as inspiration enabled him to work on a large scale and share his work with countless passers-by. “I really liked to share what I did in the subway or the train station. This was an important facet of the work for me,” he explains. “I liked that you could give something back to the community and share your art piece.”

Bright red and fragile-looking, his constructions resemble a tangled mess of a giant jackstraws game. They’re playful but also jarring – foreign, alien-like entities that stick out, in stark contrast to their environment. Although he has ventured into constructions of steel with his ‘Wind’ and ‘Rock Strangers’ installations, it is the stick formations that have become Quinze’s immediately recognisable stylistic motif. “I love working with the stick form. I’m fascinated by chaos – although I believe there is no chaos, only structure,” he says.

Nothing is haphazard or left to chance when working on such a large scale. “I find it interesting what you can achieve architecturally with these sticks. I like the challenge,” he says. An unimaginable amount of thought goes into the works. From concept to realisation, his pieces take years to construct, and there’s little room for error or spontaneity once past the model stage. “When you build public installations of this size, there is a lot of responsibility. There are environmental and elemental challenges to consider – wind, rain, earthquakes. The preparation itself can take up to three years.”

But Quinze also revels in challenging and confounding viewers. “My constructions are about surprising people. ‘Camille’ was composed of more than 120 tonnes of wood. It looked like sticks were thrown in the air and suspended there. People couldn’t understand how this was possible. Where was gravity? It took me 15 years to be able to achieve that technique.”

His works have mushroomed across a range of landscapes around the world. Take the aforementioned ‘Camille’ (2010), a giant red dragon installation that pulsated and snaked its way across a bridge in Rouen, France. ‘The Sequence’, an installation built in Brussels in 2008, joins the Flemish Parliament with the House of the Flemish Representatives. ‘Red Beacon’ (2010), in Shanghai’s Jing’an Sculpture Park, erupted out of the landscape, a bold, bright red figure among the greenery of the park.

The ease and efficacy with which Quinze was able to see to the construction of his installations was one of the deciding factors behind the recent move of his atelier from Belgium to Shanghai. “I really like the culture and the people. They are open to change, and not afraid to make decisions,” he explains. But China is also the artist’s biggest market. “At the moment I’m working on eight large installations. After Chinese New Year, there are even more contracts.” His installation at Art Stage Singapore, ‘Breeding Life’, a glass house that sprouts his trademark stick formations within, is a prototype for a Beijing museum installation. It’s one of 40 to 50 glasshouses, intended as a contemplation of life and a journey into self-reflection.

Though located in urban environments, Quinze’s work carries on the traditions of environmental art rooted in the 1960s Land Art movement. He prefers to work with naturally salvaged materials such as wood, which he then recycles after each project. The nature of the works is impermanent, existing only in photographs and videos after they’ve been dismantled.

Quinze’s creations were never intended to be permanent monuments of artistic and architectural prowess. What all these works have in common is the desire to communicate and engage with, as well as foster, a sense of community. “I like seeing the reaction of the neighbourhood. People use the installations as
a meeting place, a talking point. The art brings people together,” he says. “People and culture, and how people develop cities and their own environment – these are the things I’m passionate about in life.”

Quinze sees himself a democratiser of art, opening a dialogue between the work and his viewers. “When you grow up around art, I think your quality of life is better. You ask different questions and your world-view is different,” he says. “Only a small percentage of the public goes to opera and museums, so I wanted to spend my life bringing art to the public.” Although nothing is on the cards for Hong Kong yet, let’s cross our fingers that Quinze’s monumental, bright oases of art and quiet contemplation sprout up among our steel and concrete skyscrapers in the near future. 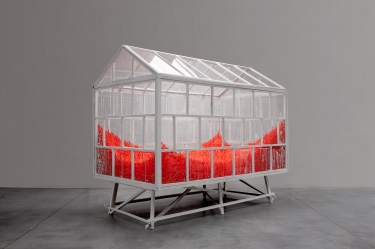