Earlier this April I got the chance to hop off to Paris and attend the world class CSI5* jumping competition, the Saut Hermès. As an equestrienne and jumper I couldn’t bear to tear myself away for even a moment from the three days of competition at the Grand Palais; it was some the most impressive and exciting showjumping from the world’s best riders. To top it all off, the entire event was done with the attention to detail, elegance, and passion for heritage that the Hermès brand has come to be associated with.

Below is my report on the Saut Hermès for Asia Tatler and a gallery of photos I captured from the magical event. Enjoy!

Published in Asia Tatler, May 2013

T he wet, sun-speckled cobble- stones of the Champs-Élysées reflect back puddles of orange while flags flutter down the length of the famous avenue, extending as far as the eye can see – an elegant declaration that something festive is afoot in the city. Outside the white marquees next to the glass-domed Grand Palais, the trot and whinny of horses can be heard and a sense of anticipation fills the spring air as one of the world’s most prestigious equestrian events, the Saut Hermès, comes to life. Sponsored by the titular French maison as part of its commitment to competitive equestrian events, this year’s incarnation is the fourth edition of the three-day, CSI five-star showjumping competition in the heart of Paris.

In front of 12,000 people, 38 of the world’s top showjumpers come together under the glittering glass and the steel nave of the Palais to compete for almost half a million Euros in prize money. The sold-out event attracts horse enthusiasts from around the globe, who are rewarded not just by the edge-of-your-seat, world-class jumping, but also equestrian vaulting and acrobatic displays between competitions, as well as performances by the Cadre Noir de Saumur, an “equestrian corps de ballet” founded in 1828, this cavalry of riders, which was added to UNESCO’s intangible heritage list in 2011, is an example of the very best of the French academy horse-riding tradition. over the three days, they display horsemanship of unparalleled elegance and beauty.

Saut Hermès aims to show that the brand is more than just a luxury goods house, and that it maintains a respected position on the competitive equestrian circuit. Sylvie Robert, director of equestrian events for the Saut Hermès, thinks the competition has all of the ingredients to set it apart from other high-level equestrian events. “This competition is the result of a mix of exceptional things: first is the maison Hermès; and second is the Grand Palais, on one of the most beautiful avenues in the world on the Champs-Élysées. And we have some of the most exceptional riders in the world.” The choice of the Grand Palais as a venue for Saut Hermès is no mere coincidence. Although now synonymous with couture fashion shows and cultural exhibitions, one of the original purposes of the Palais when it was built for the world fair in 1900 was to house equestrian events.

Anne-Sarah Panhard, managing director of Hermès distribution France, says the venue was a natural choice. She explains, “Hermès used to participate in equestrian events in the Grand Palais up until 1957. This location used to have equestrian parades, jumping competitions and all the other equestrian disciplines. The main maison on Faubourg Saint-Honoré is located in the same area, so it’s in our roots, like the equestrian world.”

Long before Hermès became associated with iconic handbags, or became a byword for the non-plus-ultra of luxury, the company was a sellier (saddle maker). Indeed, the esteemed leather-goods brand has been catering to its equine clients and riders since 1837 and Xavier Guerrand-Hermès, the founder’s great-great-grandson, is reputed to have once said, “Our first customer was a horse.” Six generations on from the brand’s inception, the Hermès family continues the traditions on which the company was built. The horse is critical – equestrianism is incorporated into the Hermès logo and its seasonal silk scarf collections, and continues to be a source of inspiration for its ready-to- wear collections.

A sport of great skill on the part of both the rider and horse, showjumping requires perfect communication between rider and animal, as well as quite a bit of luck. Nothing is certain
in showjumping, and horses can be unpredictable at the best of times – just one millimetre or one second is often what stands between elimination (or a fall) and victory, and previous Grand Prix winners cannot be assured of securing a place at all in the following competition. The impressive line-up of competitors reads like a who’s who of the international equestrian world, enough to turn well-heeled grown women into giddy 14-year-old Saddle Club devotees. Among the world-class competitors are: British Olympic showjumper Michael Whitaker; Australian competitor Edwina Tops-Alexander, the world’s top female showjumper; German rider Christian Ahlmann, currently the world’s number-one showjumper; and US-born German rider Meredith Michaels-Beerbaum. They are joined by a team of French riders considered athletic celebrities on their home turf, if not all over Europe – Roger-Yves Bost, Simon Delestre, Penelope Leprevost, Michel Robert (France’s most titled rider), and the winner of the recent Longines Hong Kong Masters, Patrice Delaveau.

The final Hermès Grand Prix has the audience in a dual state of anticipation and admiration, as the riders and their horses negotiate the complicated course with jumps of 1.6m in height on a much-needed, blissfully sunny spring day. Despite some stellar riding from the French this year, Germany’s four-time Olympic medallist Ludger  Beerbaum (the “Kaiser” of jumping) and his horse, Chaman, ultimately take home first prize as they effortlessly clear the obstacle course, followed by a rising star from the us, 18-year-old Reed Kessler.

Aside from witnessing some of the world’s finest international showjumping, visitors also have the chance to explore an entire universe of equestrianism,as well as the latest creations by the house. Flanking the showjumping arena are a number of Hermès-designed galleries – including workshops demonstrating the making of a saddle, an equestrian-themed photographic studio and an exhibition featuring the photographic works of Jacques Henri Lartigue that echo the brand’s theme for this year: “Chic, le Sport!”.

A pop-up Hermès equestrian store presents equipment and attire for both horse and rider. the house outfitted the french equestrian team at the Olympics in London last year, and its equestrian line certainly measures up for elite competition with the brand’s signature chic and eye for detail. Marion Bardet, director of the brand’s equestrian line, says, “We are always trying to find a balance between tradition and craftsmanship. We want to keep these traditions alive but also marry them with technological improvements. We try to keep the elegance of our equestrian products but we also want to mix the elegance with technical products adapted to high-level sport. We really feel that professional riders consider Hermès to once again be at the top for quality-performing products.” If you weren’t an equestrian fan before seeing some of the Hermès- sponsored riders perform, you’ll certainly wanted to hop on a horse in all the house’s finery afterwards.

The crowd embodies French sartorial nonchalance – vibrantly scarved (including the lapdogs, biensûr!)and be-Birkined, with nary a logo or heel in sight. They are perfect ambassadors for the Hermès brand in a way that no street blogger or celebrity could ever nail. It’s easy to get distracted and lose sight of the real subject at hand, but the boisterous and thunderous applause punctuating the afternoon redirects the attention back to the real stars of the event. This is not a fashion showcase; it’s a return to heritage.

Despite a jam-packed international equestrian events calendar, in only a few years the Saut Hermès has established itself as one of the most prestigious equestrian fixtures of the year. “It’s also part of Parisians’ life now,” explains Panhard. “We have more people who want to participate. We feel it’s natural to keep this event going for along time.” Robert also believes that the Saut Hermès has become “The place to be for the riders, guests and partners. It’s in the most beautiful venue by the most beautiful maison.” With a world-class event embodying the spirit of sportsmanship, Hermès has proven it is undeniably back in the heat of the competition – fitting for a house that holds the whip hand when it comes to outfitting the horsey set in elegant style. 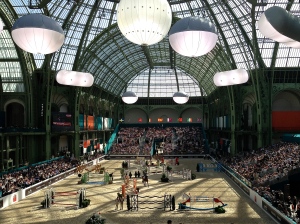 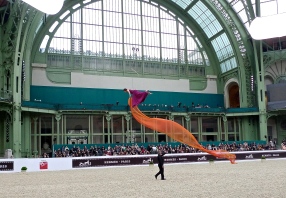 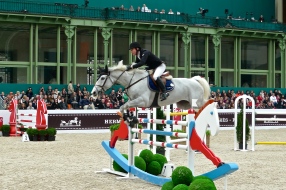 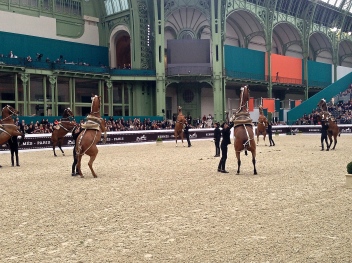 Almost 150 years after a Hermès saddle won first prize at the world fair, the brand has returned to perfecting its initial métier. The brand used the occasion of this year’s Saut Hermès to launch its new Cavale showjumping saddle. An object of unrivalled elegance and workmanship, it’s also remarkably comfortable to boot. Ergonomically designed and injected with memory foam to mould to the contours of the horse’s shoulders and back, it delivers as close a contact with the horse as possible. developed in collaboration between the house’s craftsmen, veterinarians and its professional showjumping partner, Simon Delestre, the saddle was trialed by the rider in five-star competitions over three years before it was perfected and ready for the market.

While the historic association between Hermès and equestrianism is undisputed, competitive dressage and showjumping have for many years been dominated by a number of other saddlers, with Hermès rarely represented until recently. As with all of its products, the maison‘s dedication to quality and innovation shines through. Marion Bardet, director of the label’s equestrian division, explains: “We really use the best quality of equestrian leathers. And we’re the only one who does the saddle from A to Z by one saddler alone. There is no tailorisation of the saddling process. By working like this, our saddlers feel very responsible for their saddle – it’s their creation. They want each saddle to be perfect.” Like the house’s renowned bags, creating a saddle by hand is a long, painstaking process. It takes a minimum of 25 hours to make one saddle, depending on the requirements of both rider and horse.

Behind The Scenes- The Making of an Hermes Saddle 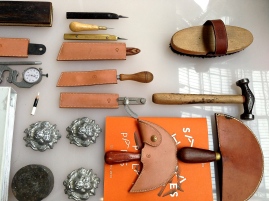 Tools for the making of the saddle seat 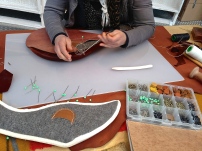 Stitching the saddle panels. Like its famous Birkin bags, Hermes saddles are handstitched. It takes five years to fully acquire the skills to be an Hermes artisan.

One thought on “Back in the Saddle at the Saut Hermès”