Lee Kit is everywhere at the moment. His work has been popping up at art fairs, including several booths at Art Basel HK; international solo exhibitions from Beijing to Palermo, and group shows at MoMA in New York, and the New Museum; and the pages of countless newspapers and art journals. There’s a lot of attention on the 35 year old Hong Kong born and now Taipei based artist, as would befit a representing artist at the 55th Venice Biennale.

Kit made a name for himself in Hong Kong with his hand painted tablecloths and tea towels, incorporating them into everyday activities such as picnics and lunches with friends. In the past decade, the Chinese University of Hong Kong graduate has built an impressive following of collectors, curators, and critics who herald him as one of Hong Kong’s most significant young artists. “He’s been continuing with the same thing and hasn’t changed his work for commercial tastes. It’s quiet, non pretentious, and with no ego,” commented Rotterdam based curator Defne Ayas.

His new site-specific work for Hong Kong’s Venice Biennale pavilion, ‘You (you)’, is a continuation of his exploration of the quotidian. The installation feels somehow quiet and solitary, like walking into a room that has been lived in but recently vacated, with remnants of the previous inhabitant’s life left behind. The experience is a little voyeuristic, an emotional limbo of sorts.

Outside in the concrete courtyard, suspended on an overhanging wash-line, one of Kit’s pastel coloured towels blows gently in the breeze. Before you step into the indoor installation, two security booths and a multi-coloured umbrella complete the outdoor mise-en-scene. They are so obviously Hong Kong (in fact, they were shipped over) yet in the Venetian environment, with the canal framed by a doorway and another multi-coloured umbrella, the effect is displacing. “You are uncertain about the things you’re looking at”, comments Lars Nittve, Director of M+, the pavilion’s co-presenter. It’s difficult to determine where the installation ends and reality begins. What’s part of the installation, and what isn’t? A cigarette bin in the courtyard is stuffed full of visitors’ cigarette butts and has stacks of empty glasses piled atop it on the opening day. Ummm … is it just a cigarette bin, or part of the installation? (The latter, as it turned out). Inside, a vacuum cleaner lies on the floor, as though someone absent mindedly walked away from what they were doing and forgot about packing away the appliance. Objects are scattered seemingly randomly throughout the two rooms; a bed; a table; some napkins left forgotten on the ground; found objects gleaned from hotel rooms and trips overseas. But the whole is uncluttered, modest and simple.

Overall, the work has a painterly composition, betraying Kit’s academic background in painting. “I feel like I’m making a big painting”, Kit explains on the eve of the pavilion’s opening in Venice. “The show itself is like a big canvas. But the way I paint here is by placing objects and making compositions in the space.” The installation prods the viewer to think and engage, rather than impose a particular interpretation. “This is not the type of exhibition that is in your face. It doesn’t give its message right away”, continues Nittve.

It takes several visits to settle into the work to get the emotional gist of the piece, but once you surrender to it, the space becomes a quiet oasis of contemplation, a welcome respite from the heady madness of the biennale.

I caught up with Kit in Venice on an early morning before the crowds descended upon the pavilion, to chat about his work and life as an artist.

Check out the Hong Kong pavilion at the 55th Venice Biennale, on until 24 November, 2013.
http://www.labiennale.org 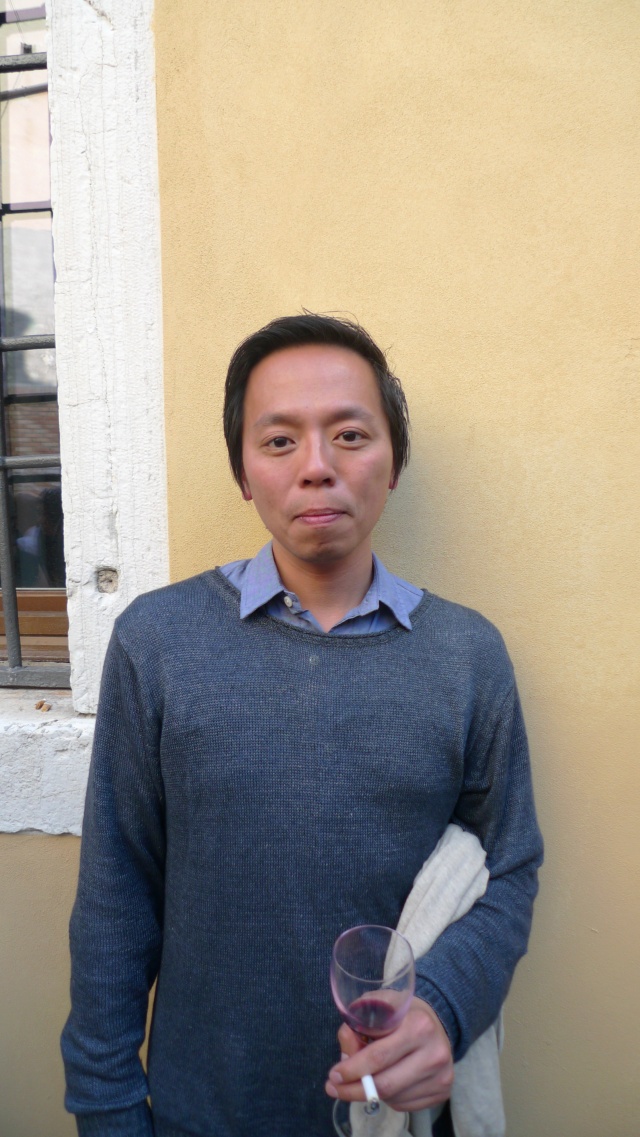 From Painted Beginnings to Installations
“In this show I used materials I collected from Sharjah, or Italy, Taiwan … I don’t know how it evolved to this stage, but I feel like I’m making a big painting. The show itself is like a big canvas. But the way I paint here is by placing objects and making compositions in the space; they’re not random. Well, somehow they’re random, like those napkins on the floor. I placed them on a small table and the wind from the open door blew them away on the floor. I wanted to bring some energy into this room, because the setting is too regular.

Back in the early days, around 2002, when I was still studying in the university — it was the time I started making those hand-painted fabrics and patterns — I thought, I want to get away from painting. It’s very strange, I enjoy making stretchers by myself, but I don’t want to mount any paintings on it. I enjoy painting, but I just don’t want to see a canvas mounted on a stretcher and then hang them on the wall. So, then I evolved to making stretchers and pantings separately. One is more my hobby, making stretchers, and the other is making the hand-painted fabrics. Then I realized I was concerned about how the frame thinks, because painting is basically a frame (it’s contained). I think what is more important is the mindset, which is also a frame. At the same time I started to use my so called paintings in picnics or lunches with friends, or as bedsheets. It was during SARS in 2003 … The hand-painted cloth to me is like my diary but no one can read it. At most maybe kids could tell whether I was happy or sad in a certain moment from the colour I used.

Being and Nothingness with You (you)
I was curious to explore certain emotional states, like sometimes we feel empty. Sometimes you wake up at night without any reason, and you cant get back to sleep. You sit at home, it’s very quiet, calm, but you don’t feel happy. You don’t feel peace inside … You feel nothing … I want to capture these moments. For example that corner with the empty table, it’s about missing someone, not being able to control that moment. It’s neither happy nor sad … It’s (the installation) not about the historical or cultural content, or the space.

In this project, I had a few elements I already decided to use. For example, the security booth with the umbrella. This was an image in my mind for 8 years. I saw a security booth like this in Singapore. I just stood there staring at it. The image stayed with me for a long time … When I first came here for a site visit, I decided to put the booth here with an umbrella, and then the carpet, because I wanted to do vacuuming here, so I needed carpet. It sounds illogical and silly to do a show like this, to put carpets down just because I want to do the vacuuming. I trusted that there must be something in this activity, that people would feel something when they see a security booth with an umbrella at the entrance.

Hong Kong Art
The Hong Kong art scene is very small. We all know each other and we’re like a family. We seldom thought about how our career should go. We focused more on our own practice and making works rather than thinking about which gallery we should work with. I find it funny that we don’t have that intention to show our works outside or in big name galleries. But at the same time it did happen to us. We started getting more and more shows every year. A few artists haven’t moved out of Hong Kong but work a lot out of Hong Kong, like Tozer Pak. And me, I moved to Taipei … If you work outside and come back to Hong Kong it’s like you become a star. Like several years ago when Tozer Pak represented Hong Kong at the Biennale. He started having a lot of shows outside.

Taipei Times
I had a studio in an industrial space (Fotan, Hong Kong) and I worked and lived there. Now in Taipei I use my apartment as my studio. In Hong Kong I had to push myself to be quiet; I would lock my door to be quiet. I think that’s why in some of my work, even smoking, cooking, or eating my lunch becomes part of my work. I tell myself to slow down… But being an artist isn’t just a career; it’s a practice, and your life. You don’t have a choice, just like if you are a woman, or you are a man. We can’t decide, we can’t change it.

There’s no huge significant difference with the works I produce in Taipei, but the mode of working is different. Maybe I’m the only one who can feel it, because the outcome is the same. But life is better in Taipei. I’m able to have a clear mind looking at Hong Kong from a certain distance. I don’t have to get mad about everything that’s happening in Hong Kong; not just in the art scene, but the society in general.” 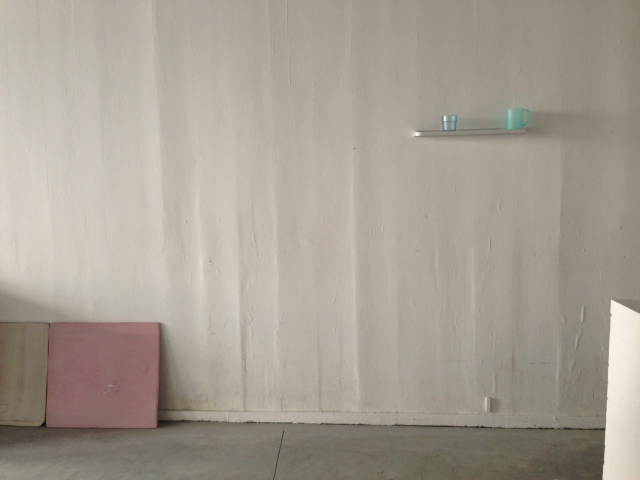 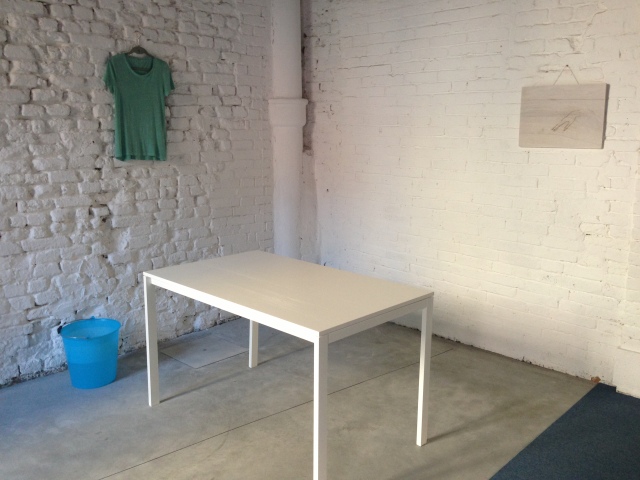 A Dinner Celebrating Lee Kit
On the eve of the Hong Kong pavilion opening, esteemed art world figures and friends, including collector Uli Sigg; director of UCCA, Philip Tinari; curators Defne Ayas and Kaspar König; and director of Mori Art Museum, Fumio Nanjo, braved the chilly Venetian weather and gathered to celebrate Lee Kit’s work for a magical evening at a transformed Venice Fish Market. The dinner tables and venue were littered with tell-tale Lee Kit motifs and the artist’s hand could be seen all around the beautifully lit venue. 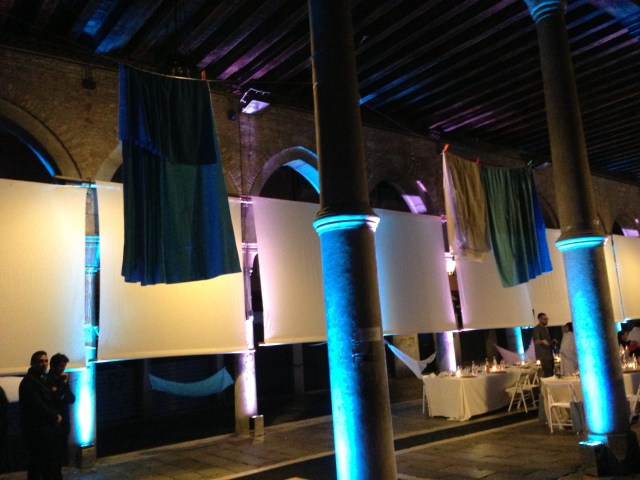