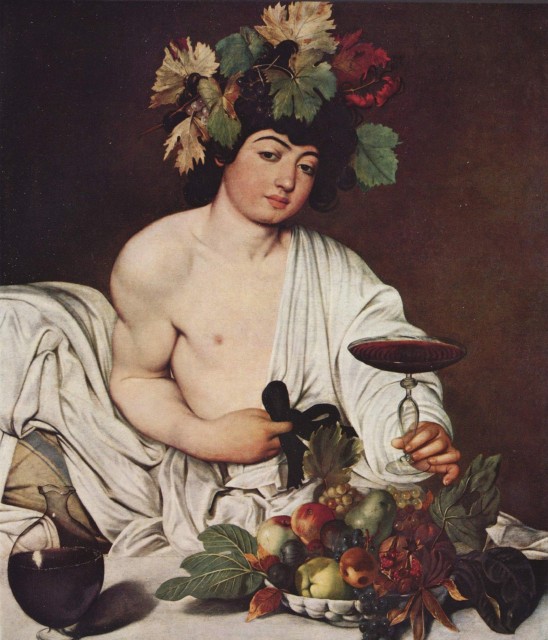 As published in A Matter of Taste magazine, 2014

A glass or two of wine has provided creative lubrication to artists throughout history, and on occasion featured in their endeavours. Here are eight masterpieces that celebrate the bottled muse in paint.

Art and alcohol have long enjoyed a tense relationship that has inspired creativity but also, sadly, sometimes destroyed it. There are songs dedicated to wine, poems written under its influence and countless paintings inspired by its loosening of the creative cogs. But while wine has fuelled the imaginations of many accomplished artists, it has also been the actual subject, or played a significant role, in several works of art, from religious images in chapels and churches to contemporary pieces commanding top prices at auction.

Alcohol, in fact, defined an entire era of painting in the late 19th century, when the bohemian demimonde of Paris ran fast and loose (remember the hollow-eyed faces of excess staring out at us in works by Henri de Toulouse-Lautrec). The happy marriage of art and wine, however, was perhaps best celebrated in 1945, when Baron Philippe de Rothschild began to commission artists to design wine-bottle labels. An art collector himself, Rothschild commissioned some of the greatest modern and contemporary artists, including Pablo Picasso, Marc Chagall, Jean Cocteau, Salvador Dali, Francis Bacon and Lucien Freud.

Just last year, in fact, neo-pop artist Jeff Koons’ design for the 2010 vintage was unveiled. Currently, this is the most expensive of the Pauillac first-growth château’s last 10 vintages, recently trading at more than US$9,000 for a 12-bottle case. And once you’ve filled the cellar with such fine tipples, perhaps it’s time to adorn its bare walls. Matter of Taste’s money-no-object wish-list of eight wine-friendly paintings from history follows, taking in everything from the creative innovations of the 15th and 16th century Renaissance to the experimentally cubist and the boldly expressionist to the gloriously irreverent pop-art of the 1960s and ’70s.

‘Bacchus’ (1595) – Michelangelo Merisi da Caravaggio
Bacchus, the Roman god of wine, is depicted – in typical Caravaggio fashion – as less an immortal, godlike figure and all too unashamedly human and flawed in this 16th-century painting. The artist had a habit of using street urchins, tavern dwellers and friends as models, and he painted figures as they were, warts and all, introducing an element of gritty realism that earlier artists might have glossed over.

Bacchus here is represented as a seductive and tipsy youth – his fingernails dirty, his skin flushed pink and in a state of disheveled undress. A large glass of red is held out almost as an invitation to the viewer to join him, but it is an invitation to a party long over. The crown of wilting leaves that decorates his head and the basket of seen-better-days fruit allude to both the transience and impermanence of life and beauty, but also hint at the excess of the night before.

Caravaggio not only painted one of the most cited and recognised dedications to Bacchus and the sacred vine, but also imbibed more than his fair share, leading to a life plagued by bar brawls, debt and evasion of the authorities. ‘Self Portrait With a Bottle of Wine’ (1906) – Edvard Munch
Norwegian expressionist painter Edvard Munch was known for painting intense psychological tension and drama. His iconic composition ‘The Scream’ – created in four distinct versions in both oils and pastels – is one of the most instantly recognisable images in art history. In May 2012, a pastel version sold for US$119.9 million at auction.

Like many of Munch’s works, this self-portrait is a representation of the artist’s psyche. A solitary man sits at a table in an almost empty restaurant, conveying a feeling of loneliness and uncertainty. Frantic almost vertiginous brush strokes, and the clash of dull greens and blues with the warmer tones of yellow and red, serve to create a mood of oppression. Across from the despondent figure sit a bottle of wine and a glass – his only companions and his solace. ‘Grapes D.D.’ (1979) – Andy Warhol
The undisputed king of pop art, Andy Warhol was masterful at fusing art with just about everything, from celebrity and rock’n’roll to royalty, media and, pleasingly, wine. He paid tribute to the tipple with his series ‘Grapes D.D’ – a set of six screen-prints in multiple colour combinations – that features varieties of merlot and chardonnay grapes. Warhol also designed the 1975 Mouton Rothschild label.

‘The Last Supper’ (late 15th century) – Leonardo da Vinci
‘The Last Supper’ was a commission from Renaissance genius Leonardo da Vinci’s patron, Ludovico Sforza, the Duke of Milan, as part of renovations to that city’s Convent of Santa Maria delle Grazie. The mural shows Jesus and his disciples seated on one side of a long table littered with wine glasses, plates and bread, and the figures are in animated discussion as Jesus announces that one of them will betray him. ‘The Last Supper’ has attracted much historical and theosophical debate over the years, giving rise to many holy Grail theories centered on the famed chalice that is notable by its absence in the painting.

‘The Hangover’ (1889) – Henri de Toulouse-Lautrec
Celebrated for his vibrant depictions of the bohemian cabarets, decadent dancers and heady nightlife of Paris at the close of the 19th century, Henri de Toulouse-Lautrec is quoted as saying, “Of course one should not drink much, but often.” With a style influenced by Japanese woodblock prints but also indebted to Impressionists Édouard Manet and Edgar Degas, he produced a body of work reflective of the times and world in which he was immersed. Perhaps there is no more apt a title for a painting depicting the morning after a great party than ‘The Hangover’. Also known as ‘Portrait of Suzanne Valadon’ (an artist in her own right – Valadon was first woman elected to the prestigious Société Nationale des Beaux-Arts), the painting depicts the subject sitting in profile and looking resignedly, a half-empty bottle of red wine and a glass before her.

‘La Bouteille de Vin’ (1926) – Pablo Picasso
A great innovator and a prolific painter, printer, sculptor and draughtsman, Spaniard Pablo Picasso contributed to several artistic movements during his lifetime. As a pioneer of Cubism, he attempted to reconcile the two-dimensional with the three dimensional, resulting in many fragmented and spatially rearranged paintings. His ‘La Bouteille de Vin’ is a textbook example. A still life that draws inspiration from Dutch artworks of the 17th century, the painting features a bottle of wine at its center, while fruit, food, glasses and sheet music are arranged on the table. A bon vivant himself, Picasso passed away in 1973 while he and his wife Jacqueline entertained friends with dinner in the south of France. His final words were, “Drink to me, drink to my health, you know I can’t drink any more.” 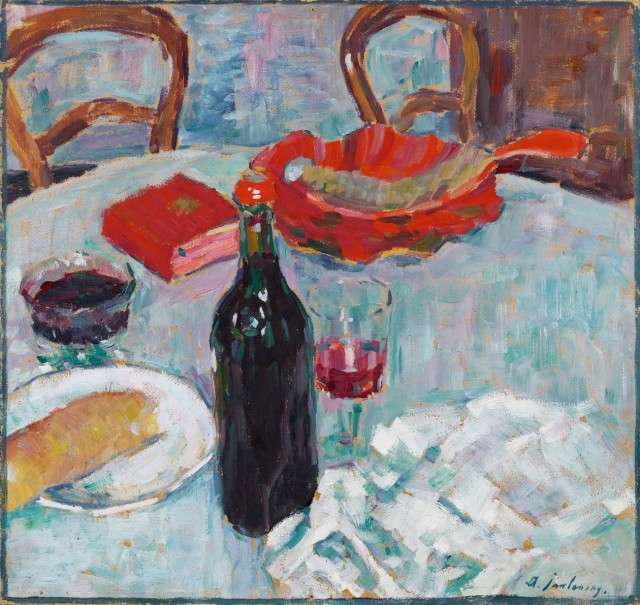 ‘Still Life with Wine Bottle’ (1904) – Alexej von Jawlensky
A leading figure in modern art, Russian expressionist painter Alexej von Jawlensky was greatly admired for his lush and boldly colored paintings in the opening years of the 20th century. This elegant composition is, as the title suggests, a still life depicting the two necessities of the sacrament and the most basic of needs (for some) – wine and bread. Two glasses of red sit on the table in a state of abandon, as symbolized by the crumpled napkin lying beside the bottle and the chair pushed away from the table. Strangely, though the glasses are full, the bottle appears to be untouched.

‘The Drinkers’ (1890) – Vincent van Gogh
Troubled Dutch painter Vincent van Gogh struggled with this colourful oil-on-canvas adaptation of Honoré Daumier’s black-and-white woodblock print ‘Physiology of the Drinker: The Four Ages’. Like the original work, the painting depicts weathered figures, this time peasants in the field rather than laborers in a tavern, drinking after a hard day’s work, both to sate their thirst and to drown their sorrows. In the background, the chimneys of industry can be seen smoking, a reference to the industrial context of Daumier’s original work.

The deliberate clash of nature and industry creates tension and dissonance enhanced further by Van Gogh’s swirling brush strokes, distortion of form and bright colors. The painting was one of many created in the artist’s manically productive year before he tragically ended his own life.

2 thoughts on “When Palate Meets Palette”