“We always say in Chinese, young people represent the future: now this sounds far beyond a cliché.” So wrote Wing Shya, when discussing this exclusive new series of images created for MOTHER. Wing is one of Hong Kong’s best known photographers. Famed for his work with director Wong Kar Wai on films like Happy Together and In the Mood for Love, Wing created this unique series in reference to LIBERATION, exploring themes of hope, future and freedom.

Hong Kong captured the world’s attention in September 2014, when the Occupy Central with Love and Peace movement broke out. Wing’s work derives much inspiration from Hong Kong, the city and its history, but in this series his focus is on the eyes of the young. “To look into the hearts of young people nowadays – what do they think of the world? How do they see the world?”

Wing is best known for his highly seductive and beautiful fashion photography, yet this series is anti-fashion. Freedom is what’s explored. The models, street-cast by Wing, pose naked, adorned with nothing more than flowers: a nod to ‘60s-era hippy movements and protests, a symbol of love and peace. The series touches on the subjects’ relationship to their surrounding space and to each other, conveying both a sense of freedom and of vulnerability. One young model is photographed running through a landscape of shanty huts set against the lit up urban landscape of tower blocks. What could be more liberating than running naked through an urban space? Yet, the subjects don’t appear entirely at ease; a feeling of alienation and tension creeps into the photos.

Wing’s series reveals the anxieties and dreams of a generation, capturing the internal emotional world of his sitters and imbuing the photographs with a dreamlike quality. The models seem lost in thought, frozen in gesture. In one photograph a girl lies on a footpath in the arms of a Mephistophelean figure–a young, red glitter painted man– her head turned away from him, distant and caught up in her own dreams, fears and hopes. In another image, a young man stands naked against a background of colourful high-rise blocks, typical of Hong Kong. He too looks away from the lens, beyond the frame to somewhere unknown, holding a plastic gun covered in bank notes: money is protection, it buys a voice and political power. In Hong Kong luxury is pervasive, real estate is amongst the most expensive in the world, and the ever-increasing economic inequality is rarely spoken about or addressed by the city’s bureaucrats. The city’s small ruling elite of property developers and assorted tycoons control the city’s economic destiny, as Hong Kong’s Chief Executive CY Leung stated in August last year: “if we ignore their interests, Hong Kong capitalism will stop working.”

But what of the interests of those who don’t make up the 1%? Inequality was an ongoing topic of debate at the protests of 2014, as young people voiced their concerns about the future and their place in the world. The growing tide of social as well as political discontent was exacerbated by Leung’s comments that if the government were to meet protestors’ demands for a free electoral process, with candidates unvetted by Beijing, force of numbers would result in the city’s poor calling the shots. Wing’s images tap into the unease of a new generation.

Perhaps the most poignant photograph in Wing’s series is that of a young couple kissing, a snake coiled around
their necks. The biblical reference is all too apparent: Adam and Eve’s fall from paradise, from innocence to knowledge, the scales fallen from their eyes. What better representation of a young generation’s political awakening? 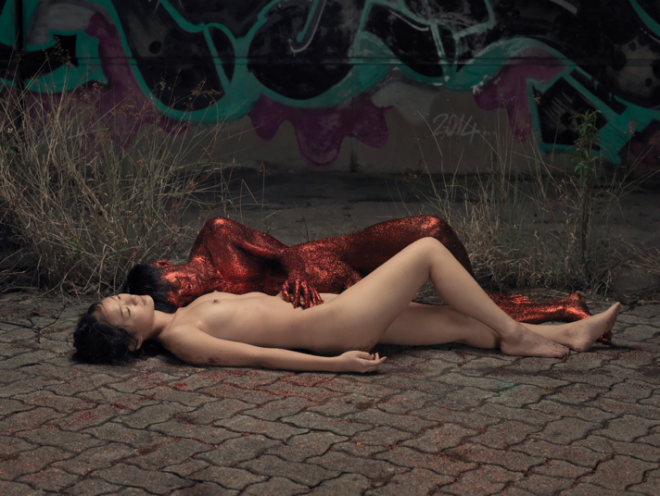 ← Neo World (Dis)order
→ A Song of Old and New: Interview with Song Dong