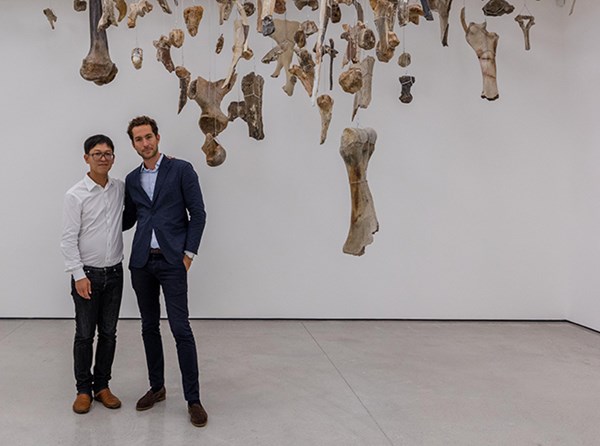 Artist Danh Vō brings together fragments—pieces of his life, and of history—to tell stories. He places these objects and works in exhibition spaces with the restraint of a Zen master, creating layers, pauses, and silences between statements. There is space for phantoms and memories to float between the works, creating a dialogue between the past and present. And there are moments of poetry.

Born in Bà Rịa, Vietnam, Vō was just four years old when his family fled the country by boat in 1979 after the Communist victory and the fall of Saigon. The family was rescued by a Danish shipping freighter and settled in Denmark where Vō was raised. Much is made of this history; it is fetishised by the media, pored through in the hope that it will provide clues to the works of this elusive artist. But Vō avoids a didactic or expository approach to art. His press releases reveal little, and often there is no explanatory note with the works on show. He allows the audience to complete the story. ‘You only need a piece. You don’t need the whole thing, just a piece to give you the freedom to imagine’, he explains. He allows the viewer to navigate his works unaided, and sift through the layers of symbolism to create meaning.

For his first Hong Kong solo exhibition at White Cube, curated by Mathieu Paris, Vō has suspended 450 Pleistocene mammoth fossils and a 17th-century Dutch ivory crucifix in the main upstairs space of the gallery. The title, You’re gonna die up there/ Keep away! The sow is mine/ Fuck me, fuck me, fuck me/ Let Jesus fuck you, let Jesus fuck you! Let him fuck you/ Lick me, lick me/ Do you know what she did, your cunting daughter?…., is excerpted from lines delivered by a demon in the 1973 horror film The Exorcist. The installation is both a tongue-in-cheek rebuke of his Catholic upbringing, and a reference to archeological finds and the spoils of colonial expeditions. These were previously exhibited at Museo Nacional Centro de Arte Reina Sofía in Madrid as part of the artist’s exhibition Banish the Faceless/Reward Your Grace (1 October 2015 – 4 April 2016). In an adjoining corridor hangs a lone object: a sword taken from the Mamluk Arsenal at Alexandria during the last Crusade in the second half of the 14th century.

The lower level gallery space contains a glass box refrigerator which functions as both a vitrine and a plinth. It contains the wooden head of a polychrome Christ, and displays a fragment of a 16th century Roman marble sculpture. A gold leafed cardboard carton of Budweiser, sits partially open against the wall not far from the refrigerator, and at the entrance to the room hangs a handwritten letter.

The letter is a copy of the 19th-century French Catholic saint Jean-Théophane Vénard’s last correspondence to his father, written just before he was beheaded in 1861 for his efforts to spread Catholicism in Vō’s native Vietnam. Written in French, one of the lines translates into English as: ‘A quick cut of the sword will separate my head, like a springtime flower that the gardener picks for pleasure’. Vō’s father, Phung Vō’, is the person who has so expertly copied the letter in beautiful calligraphy. It is part of an ongoing edition, which Phung Vō will continue, upon his son’s request, until his own death.

Ultimately the show presents seemingly random objects, bits of a riddle that require piecing together. But these fragments highlight destruction, cultural production, dismemberment, war, violence and exile. They evoke elements of political, sexual and religious history and also the artist’s own identity, history and experiences.

There is a juxtaposition of the historical and the contemporary in your work. In this exhibition, you combine fragments of antique sculptures and Pleistocene mammoth fossils, with a beer carton and lines from The Exorcist. You once stated that you wanted to liberate yourself from the confines of modernism by including objects and historical artefacts. Can you talk about that?

Modernism detaches itself from broader history, and I don’t think that should necessarily be the case. I learned much later about the Renaissance and antiquities. You find traces if you dig deeper into it. I felt it necessary to add historic layers for my own sake, as a learning process. I think that’s how that started. Also, I started to travel much more to Italy and looking at fantastic things that are part of the cultural production. The boxes came much earlier, and they have much more of a modernist context to it.

I was raised Catholic and went to church every Sunday, and I hated it. But today I feel fortunate to have been raised with this crazy iconographic imagery. You have to respect it. It’s a culture that’s brutal and bloody and perverse.

In that context, the inclusion of quotes from The Exorcist for work titles makes sense. The press release revealed little information about the meaning of the work, just an extract of demonic possession which included the lines: ‘You’re gonna die up there/Keep away! The sow is mine/ Fuck me, fuck me/ Let Jesus fuck you, let Jesus fuck you! Let him fuck you/Lick me, lick me’. It’s very provocative in its blasphemy. Is this revenge against your Catholic upbringing? Are you trying to deliberately provoke?

It’s taken from popular culture. It’s all done with a bit of humour [laughs]. And it’s liberating, I needed that. In the beginning, I had difficulties expressing those words, but now I feel fine with it. That’s good enough for me.

Would you say it’s an exorcism of your own feeling?

[Laughs] I think so. It’s not provocation because it’s about myself first of all.

It seems like you play with and layer different identities in your work. A lot of your work seems to be exploring the idea of renegotiating or reinventing your identity.

Yes, but anything else but being nationalist is good, particularly in these times. Nationalism prevents you from playing with the multiple possibilities of identities, which is stupid almost.

It seems like you’re always challenging social conventions and institutions, defying them: the provocative and blasphemous lines from The Exorcist; the questioning of the institution of marriage with your ongoing ‘Marriage Project’, for which since 2003 you have married and divorced friends while adding their official name to yours. What is your relationship with or feeling regarding societal institutions?

I think almost everything—society and social constrictions and expectation of what is happiness, etc.—is constructed by other people. I was raised with ideas of things that didn’t fit me, and I think they fit very few people in general. We have to push these aside to be able to insert ourselves into them, to find a space for ourselves.

We were all raised with this expectation that if we get a family and a good job, we will be happy. It’s just not right, especially in my case as a gay man from another culture, raised in Denmark, that’s a lot of baggage. From very early on I had to renegotiate these things, and yes, I think this is reflected in the work I’m doing.

It’s interesting that your work constantly gets framed into terms of your personal history, and experience as a refugee. A certain expectation is imposed on your work based on your history. How do you feel about that?

Of course, it’s terrible. But it also expresses the structure that defines it. It would be different if it’s a white man making abstract paintings because it comes from the dominant structure. If it doesn’t get expressed, then we don’t define it.

It’s like two guys holding hands in the street 20 years ago; people would say that they were bringing their private life into the public. But if a man and a woman do that, it doesn’t get defined because it’s hidden within the dominant structure.

Or like burkinis. You can lay naked on the beach and it doesn’t get noticed, but if you’re wearing a scarf or covering up, people are outraged that you’re expressing your private life in public. What is this? What is the public and who defines it? It’s a really tricky definition. It’s what I oppose. And it’s not a fixed structure either. That powerful structure moves all the time and we’re not even aware of it. I think that is why we have to challenge these notions.

You are challenging them but you do it in a subtle and indirect way. You leave a very open space for interpretation.

Yes, well I have had too many teachers and priests in my life [laughs]. I don’t want to act like them and impose more dogma. You can suggest things, and people can use it or not.

You use a lot of personal objects and artefacts in your work as well. How do you approach this? At what point do you realise an object can become a work of art for you?

If I knew that I would be a very rich man [laughs].

You said in another interview you don’t like to interpret your work. How do your ideas coalesce?

It’s very simple. When I put things together and it becomes too direct, then I feel that it’s not right. It’s a constellation of things that still leaves openness and freedom. It’s allowing people the space to still insert themselves into the work.

Is that the most important thing for you as an artist?

Yes, the dialogue, and freedom, for sure.

You’ve installed the fragments of mammoth fossils previously in the Museo Nacional Centro de Arte Reina Sofía in Madrid and now at White Cube in Hong Kong. They are two very different spaces; one is a national institution and well, this is a white cube. How do you navigate these spaces? How do you curatorially approach them? You’re very hands on, right?

Yeah, it’s a risk every time because I don’t work with a studio. The exhibition space becomes the place of experimentation, so I have some ideas and materials that I bring with me, and then I get to work.

What’s the relationship between the various objects?

I think, of course I have a reason that I use certain references and imagery, but to be honest when I install it’s primarily aesthetic. When you see the fridge with the box (Lick me, Lick me), it’s all fragments inside. And then the cardboard Budweiser box has fragments of a flag inside, but you barely see it unless you know that it’s there. That’s the same idea of when you have a fragment. You only need a piece. You don’t need the whole thing, just a piece to give you the freedom to imagine.