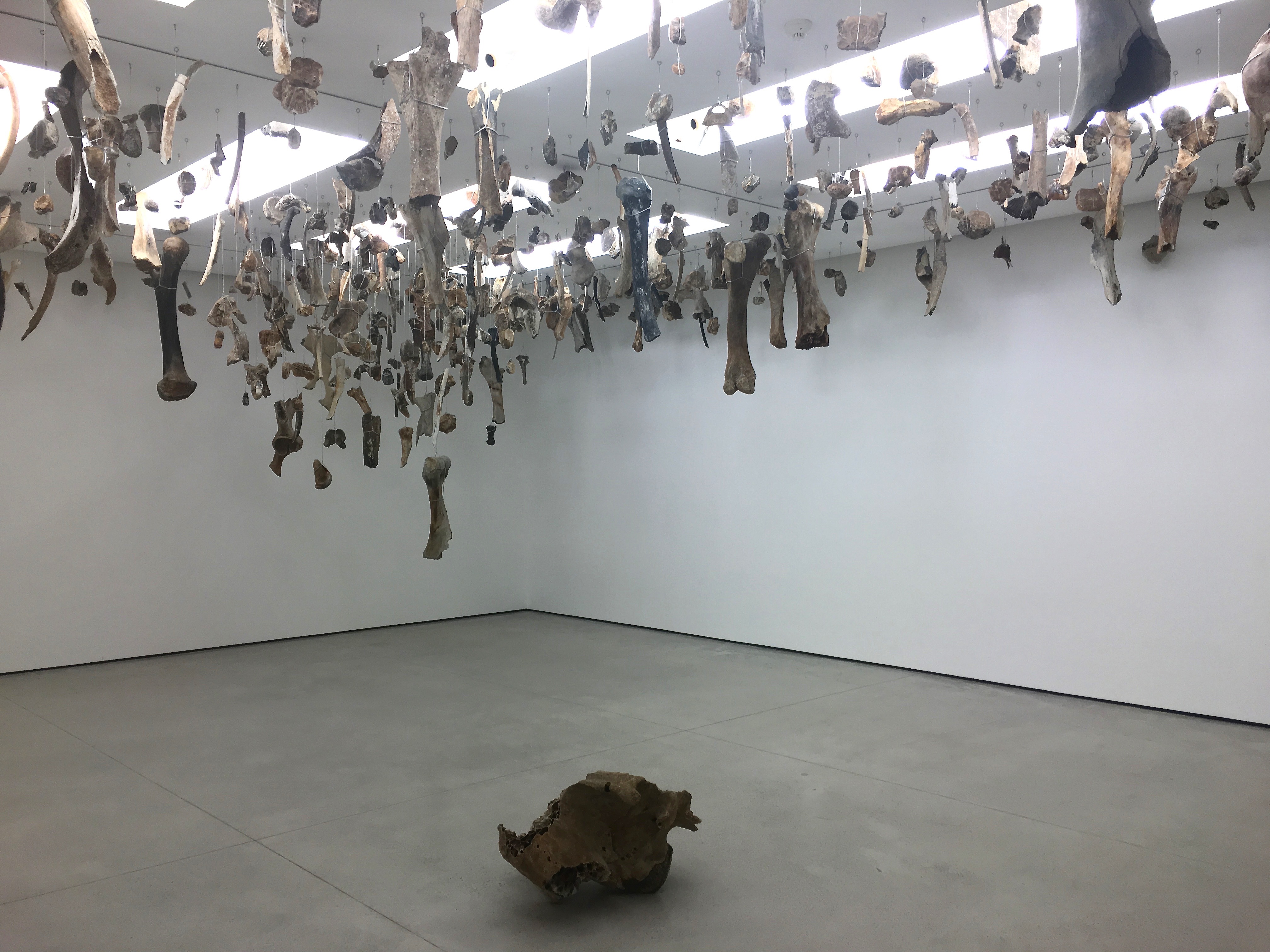 What do demonic possession, Pleistocene mammoth bones, a crusader sword and a Budweiser carton box have in common? On first appearances, nothing at all. By installing them across two floors in White Cube Gallery, Vietnamese-Danish artist Danh Vō seems to be playing a practical joke on his audience.

On the ground floor sits the installation Lick me, Lick me – a quote from the film The Exorcist (1973) – comprising a fragment of a Roman marble sculpture from the first century AD placed atop a modern refrigerator encasing a French wooden sculpture of Christ from the 16th century. Several metres away, on the floor against the wall, is a gold-leafed Budweiser carton. It looks like forgotten debris from a gallery cocktail party, but peering inside reveals gold fragments of the stars and stripes. A handwritten letter by 19th-century French missionary Jean Theophane Vénard – copied expertly in beautiful calligraphy by Vō’s father – hangs at the bottom of a staircase. Vénard was sent to Vietnam as a young monk, and was eventually executed there, writing this poetic goodbye letter to his father before his decapitation.

Upstairs a late 14th-century crusader sword from the Mamluk arsenal at Alexandria hangs alone on the wall, while around the corner fragments of 450 fossilised mammoth bones are suspended from the ceiling, along with a 17th-century Dutch ivory crucifix. The installation was previously exhibited at Museo Nacional Centro de Reina Sofía in Madrid, as part of the 2015 exhibition Banish the Faceless/Reward Your Grace. The space looks like it was decorated for Christmas by Ed Gein. 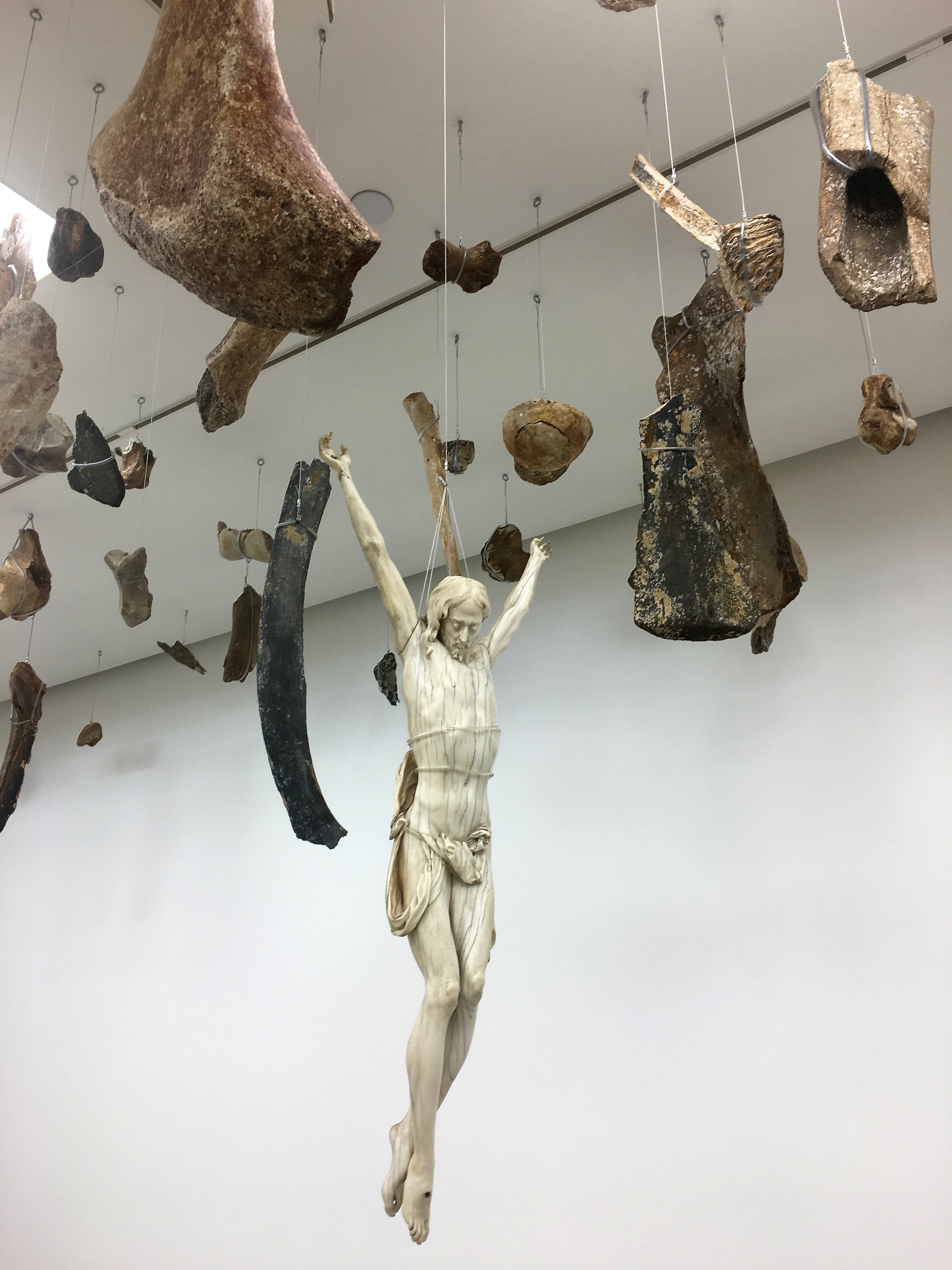 Vō works with fragments. Found objects are juxtaposed and placed in dialogue with one another around exhibition spaces; sometimes they’re banal objects from his family or personal life, such as his grandmother’s washing machine and TV, used to create Oma Totem (2009), while others are altered or manufactured objects, such as the oversized fragments of the statue of liberty in We the People (2010-13).

Some objects hold memories and stories for Vō, while others carry the histories of countries and cultures. The artist positions the objects so as to make visible the relationship between the past and the present. Fragments of Vietnam’s colonial past, symbolised by the Vénard letter and the Christian relics, are juxtaposed with the Budweiser carton, suggestive of American military imperialism during the Vietnam War. Fragments of hundreds of ancient bones, evocative of archeological finds and the spoils of colonial expeditions, war and destruction, are on the same floor as the sword, the instrument of bloody crusades fought in the name of God. The artist brings together elements of political, and religious history, but there is a heart of darkness to it all.

These fragments highlight destruction, dismemberment, war, violence and exile, all rooted in the artist’s own experiences. They memorialise Vō’s identity as a refugee from a war-stricken Vietnam, as a Catholic-raised queer Asian male, and as a migrant to a new country. The personal and the political are inextricably linked in the experiences of a refugee.

Writer Linda Yablonsky once commented that Vō “is a master of startling juxtaposition, a poet of the brutal and the delicate”. Vō’s work is most like a haiku. The narrative is inferred, found in the spaces in between. The audience is left to fill in the blanks from the symbols scattered across a space. As Duchamp once remarked, the viewer does half the work.

← Tsang Kin-wah: Much Ado About Nothing
→ Review: Marco Brambilla at Simon Lee Gallery