A row of 12 colourful creatures cast shadows behind a blue wall in Perrotin Gallery Hong Kong. A series of paintings–large and small–fill up the other wall spaces, but it is these creatures, which from a distance resemble ethnographic tribal sculptures, that catch your eye. Closer up, extra-terrestrial looking, round painted mouths, and big protruding eyes stare back at you.  Tiny humanoid figures made of soft vinyl sprout up on these wooden sculptures like lichen growing on trees. One wooden sculpture bears little figures from her headpiece like ripe fruit, resembling some ancient fertility goddess, or high priestess. Another carries the tiny figures in its arms like an offering and wears them atop its head like a crown. These carved and painted wooden sculptures are evocative of primordial figurative images from the Japanese Jomon period. At the same time they are cute, or kawaii, in that particular way that has become synonymous with Japanese pop culture–– embodying a blend of high and low-brow culture promulgated by artists like Takashi Murakami––and unsettling and creepy.

It was as a painter, rather than as a sculptor, that Japanese artist Izumi Kato (1969) carved out a career at the age of 30.  Recalling the 1950s Gutai artists like Kazuo Shiraga, Kato paints not with a brush, but with his hands, applying the paint with latex gloves.  The outlines and contours of his painted figures are so smooth they bely the use of the hand. Initially an experimental gesture of rebellion against the strictures of painting at the Musashino Art University of Tokyo from which he graduated in 1992, this sculptural approach to painting– using the hands to directly manipulate the wet paint on the canvas– became a hallmark of his painting, allowing for the development of a distinctive naïve technique. Dots, lines and circles––simple elements that form the basis of drawing––were incorporated early on in his work and still feature today in both his eerie figurative paintings, and sculptures.   Divided into halves or thirds the lonely figures on his canvases look like they have almost been collaged together, floating in space, throbbing and pulsing with auras of colour.

Kato added sculpture in 2005 to his practice as a way of working through creative blocks in his painting. It seemed like a natural extension of his painting, and has now become as important to his practice. Like his canvases the sculptures too are composed of several pieces, sometimes incorporating different materials and forms for the head and body like Frankenstein-esque creations. His sculptures are not moulded, but hand-chiselled. Made from camphor, a fragrant soft wood used in Buddhist statuary, chisel marks and cracks are visible on the surface of the roughly hewn figures, like scars.  These wide-eyed extra-terrestrial figures recall the films of Hayazao Miyazaki, such as My Neighbour Totoro and Spirited Away. But the work isn’t just a perfunctory nod to the aesthetics of Japanime pop culture.  There is a spiritual and traditional element to Kato’s art. Like Miyazaki’s films, it is grounded in Shinto traditions and stories, where nature and humanity’s relationship to it, plays a central theme.

Kato hails from Shimane prefecture, a coastal region in Western Japan known as the land of the myths, where old religion is still practiced, and where legends have strongly shaped the local culture. It is also where Izumo Taisha, one of Japan’s most revered and oldest Shinto shrines, can be found.  Myths and legends of gods and ghosts coloured Kato’s childhood, and trickled down as an influence that shaped his visual language.

Kato’s new works for Perrotin Gallery Hong Kong also feature granite stone, a new material that the artist sourced from a coastal strip of reclaimed landfill where he’d set up his studio. The artist expresses a respect for his raw material which is chosen carefully, almost ritualistically, mostly for its shape and character, and left unchiselled, before painting it for specific sculptural pieces. A section of the stone is always left unpainted so the viewer can appreciate the natural innate quality of the stone, drawing on the Japanese aesthetics of wabi– of simplicity and emptiness.

We meet in his Hong Kong studio in Ap Lei Chau––where he divides his time between Tokyo– overlooking a blindingly bright coastal landscape of grey water, which calls to mind the work of another compatriot, Hirsohi Sugimoto. Over tea, I sat down with Kato and his translator to chat about his latest exhibition at Perrotin Gallery, and his rock band, the Tetorapotz.

Tell me about that one small painting you have hanging in your studio space. That seems to be the only work you have here.

Originally I made this artwork in the ‘80s. After I got back to Hong Kong I found this piece at an auction and decided to buy it back. I didn’t keep any of my earlier works. In the past I sold every work I made to make money. Now I can keep some pieces.

You enrolled in art school but once said that you weren’t fond of painting or painters. What changed?

I went to art school in Tokyo – I grew up in a rural area in the Shimane prefecture–  and I purely wanted to go to an exciting urban place.  At college I really liked music a lot– I wanted to be a musician. But by the time I got to 30 I felt that art was actually good for me and I should grow up and go to art school.

Does music still play a role in your art work anymore or is that done with?

Actually, from last year I started to reorganise my art band. I do the music purely as a hobby at this point.

You’re in a rock band? What do you play?

I play the drums. The band is called the Tetorapotz. I have a demo CD.

We filmed this film clip on a small island in the south of Japan [Koshikishima Islands]. We were invited by a gallerist there for a one day workshop. It was five artists–Yasuhiko Hayashi of Paramodel, Mrs Yuki, Minami Isikura– so we worked together to make a band. We made our own masks in the shape of the tetorapotz. Each of us made one work together for the band cover.

We made four songs so far and are now working on a new song this year, so it should be finished soon.

Will these works be used in an exhibition?

I would like to use it for an exhibition in the future, especially in Hong Kong if there is the chance.

How does your approach to sculpture differ from that to painting? What does one allow you to do that the other doesn’t? And how do they inform each other?

For the art, I use different materials for sculpture and the paintings. I purely want to improve my work, that’s why I get inspiration from the material and use it for my art work. It’s not intentional, the choice to make sculpture or painting. I don’t want the art work to have any [definitive] meaning. What I mean is, it’s not something I want to explain.

You paint directly with your hands, calling to mind the Gutai artists of the 1950s. What inspired you to ditch the paint brush? And how did your work change by doing this?

By using my hand I can paint as I want freely. I use my hands as a tool, and I can better express my thoughts and emotions through my art work. It doesn’t mean I’ll always use my hands. If I find a more suitable tool then I will be happy to explore that too.

You hail from a part of Japan where Shinto practice is very strong, as are myths and legends. Does this inform your work in any way?

When I was a child, growing up in the Shimane prefecture, the island had a very spiritual atmosphere. For example, the island is surrounded by the sea and often children would fall in and drown, so people started to believe there are Gods in the sea and mountain. It’s a belief in nature, Shinto. Of course, I am influenced by nature and the mythological stories as well.

I’m interested in this idea of dissection in your work. Your sculptures are composed of several pieces, sometimes using different materials and different forms for the head and body. And your canvases, particularly the recent series, are divided into halves or thirds and look like they have almost been collaged together. What is the thinking behind this?

As an artist I feel like I have moved on and developed from my last exhibition. I wanted to use different materials to create works as I imagine them. Even the canvas itself, last time it was one piece now two. I have gotten much more confident in using different materials, but it’s still of course the one piece of art. I think that’s where my art has become most different.

I want to challenge myself. It’s like the rock music, it’s about challenging myself, and exploring new things, new materials.

When you’re in the studio working, do you start with an idea in your head, a sketch, or is it the material that leads you?

Painting on the stone requires more time to settle on the stone than canvas. The techniques are different, and it takes much longer. Wood and stone require a brush because the tool is much more suitable for the material.

Upcoming work is with Hong Kong stone from the shore outside my studio. The stones have their own characteristics of the geological area. The Japanese stones in the exhibition are round, the Hong Kong ones are much pointier and sharper. Usually when I create on stones it’s different to canvas. I don’t paint the whole stone–I leave part of it unpainted. I want the audience to see the original pure stone with the work, to see the character of the stone.

So, the Hong Kong stone works, I saw one in the studio. Tell me about that?

It’s in preparation for the heritage project in Hong Kong, for a public space. We can’t say much more than that, but it’s very meaningful. You see the materials from the heritage of the city for the project. 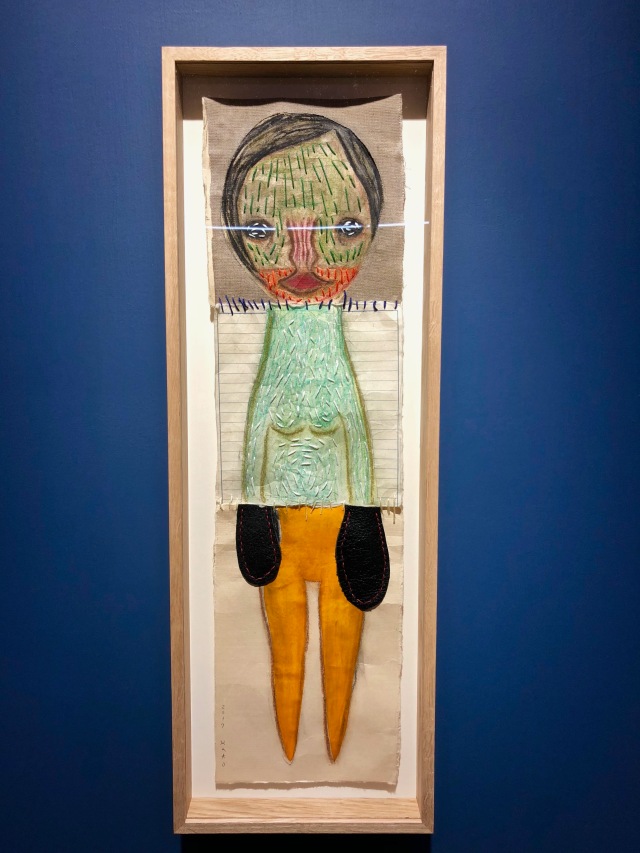 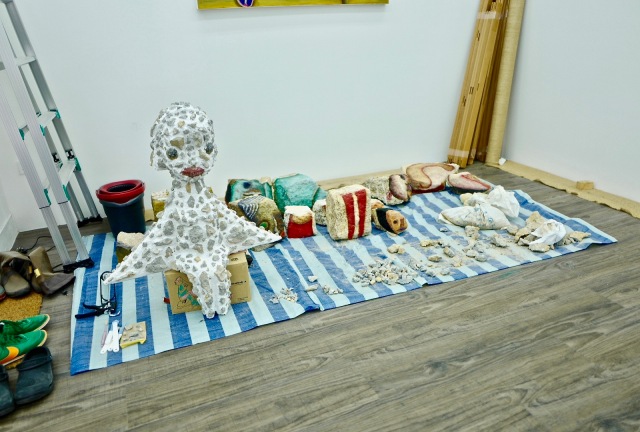 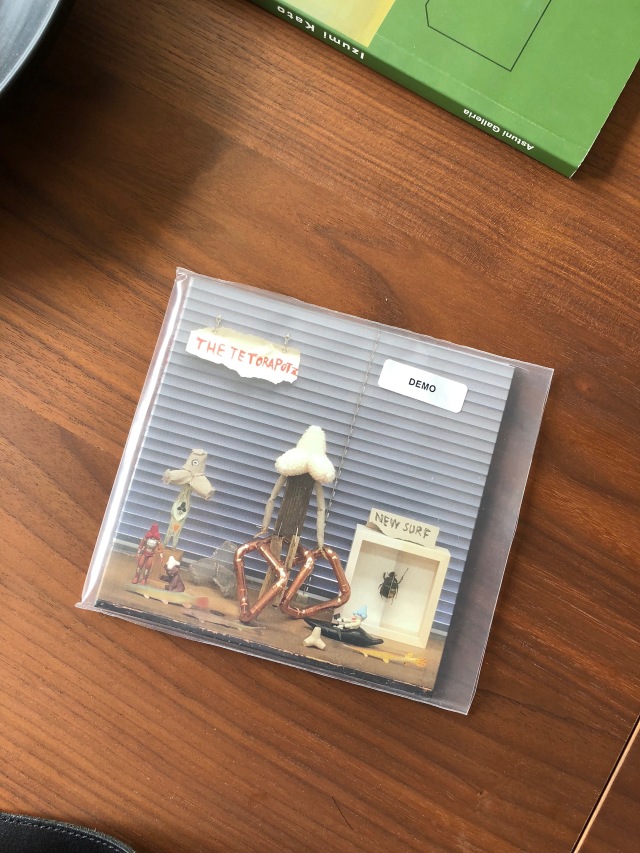